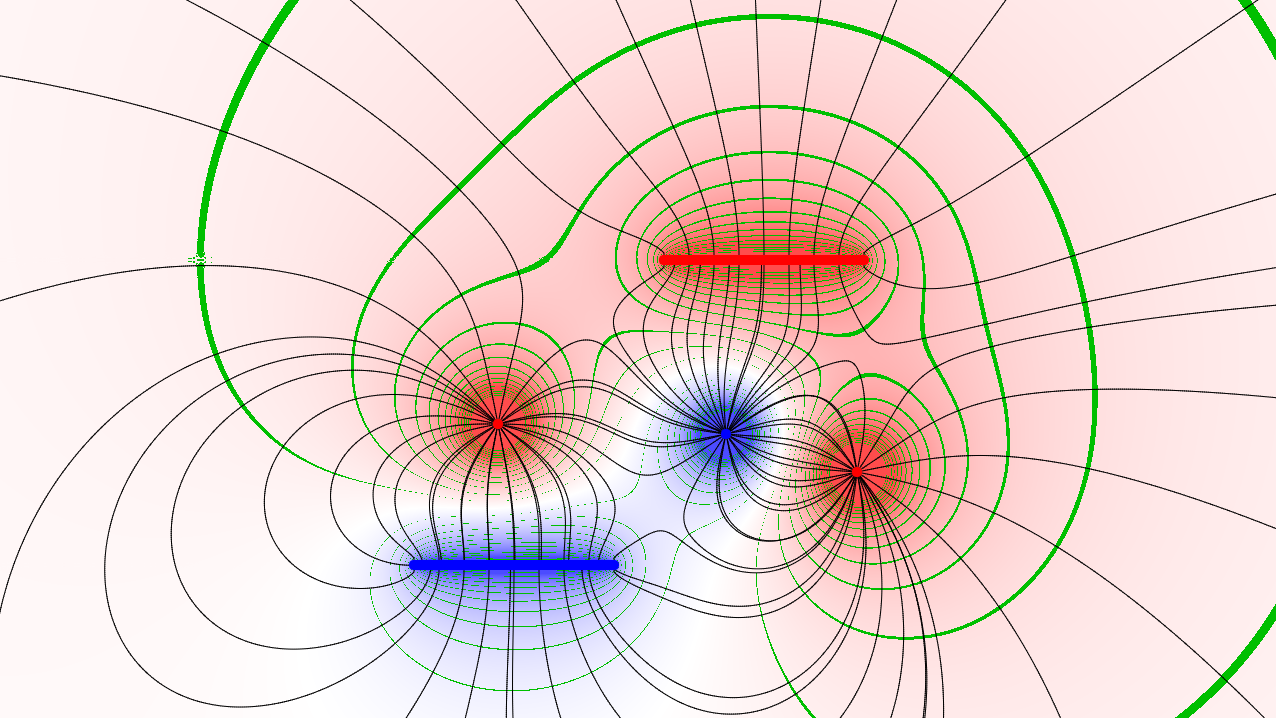 I recently saw a few blog posts (such as this), which inspired me to do something with WebGL. In Physics class we just finished learning about electric and magnetic fields, and I wanted to see what electric field lines would actually look like, as opposed to something that I just drew on paper. My visualisation can be seen here.

An electric field is a vector field, where each point in space has a direction and magnitude attached to it. In an electric field, these vectors represent the force that a charged object (1C) would experience when placed in that position. To illustrate this vector field, electric field lines are drawn emanating from a charge, which represents the path a charge would take, given an initial position, where the line starts.

My visualisation of this uses a normal 2D canvas for this (no WebGL yet!). A function called getStrength calculates the electric force at a given position. This calculation relies the superposition principle, where we sum up all the forces created by each charge in the simulation.

Each point charge creates a force F: \[ F = \frac{kqq_0}{r^2} \], where \(q\) is the charge of the source, \(q_0 = 1C\), and \(r\) is the distance from the charge to the position considered. Then initial starting points for paths are created, radially dividing point charges into divisions. These paths are then calculated using Euler's method.

To extend this to 2D (forces are vectors, not scalars), we consider the vertical and horizontal components of this force separately. On each of those, we take the limit as \(n\) approaches infinity, resulting in an integral.

The expansion and vertical component of the force is left as an exercise to the reader.

The calculations are all very similar to before, but this time there are no vector components!

For a plate charge the electric potential is calculated similarly to the electric field. There is only one scalar component now:

Using this formula for a plate charge and the previous formula for a point charge, we calculate the total electric potential \(\sum V\) at a point. This point is then assigned a colour based on sign and magnitude, and rendered to the screen, all in a fragment shader!

Credits to Jacky Liao who helped with a bunch of math and stuff!